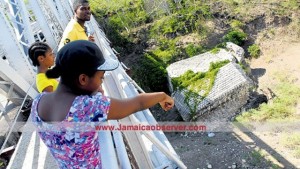 Residents looking on from the Rio Minho bridge, in May Pen, Clarendon, from which Oraine Stephenson jumped to his death Wednesday.

THE 24-year-old man who jumped to his death from a bridge in May Pen, Clarendon had a history of mental illness brought on by marijuana smoking, his parents have claimed.

The parents, in an interview with the Jamaica Observer on Friday, said their son Oraine Stephenson started displaying troubling behaviour and repeatedly spoke about hanging himself since he started smoking in 2010. Still, Kesbert and Ivorine Stephenson said they were shocked by the death of their son, who was on medication.

They said his death came as a surprise because their son would often say he loved life when confronted about his comments about killing himself.

The young man, a resident of Paisley in the parish, jumped from the Rio Minho bridge on Wednesday morning. He died after hitting the dry river bed, bringing an end to a life that had been on a downward trajectory since his introduction to marijuana and rum.

According to his father and mother, his morning started out with him singing aloud gospel music, then later weed smoking in May Pen, where he should have been visiting his doctor, before later taking his life.

“I’m surprised that he jumped from the bridge,” childhood friend Merika told the Observer. “I always thought he would have hung himself.”

Merika and other residents said that Stephenson was always threatening to hang himself, especially when he drinks and gets drunk. According to his father, he got sick while attending the HEART Academy in Portmore and dropped out.

The parents said things started getting worse when he started working at a funeral home in May Pen as his drinking and smoking got out of hand. But his mother said she never thought it would come to this.

“When I asked him if he was really going to take his life he would say, Mi love life’,” she said, adding that the day before the tragedy, her son, who had been undergoing counselling, had been talking about going back to school to further his education.

“He wanted to be like his younger brother who has 17 subjects,” Ivorine said, her voice filled with pain.