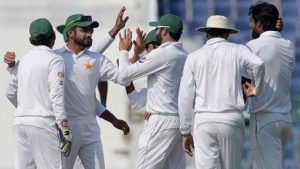 Pakistani cricketers celebrate after the dismissal of West Indies’ batsman Darren Bravo (unseen) on the fourth day of the second Test between Pakistan and the West Indies at the Sheikh Zayed Cricket Stadium in Abu Dhabi on October 24, 2016

By close of play Pakistan had taken four wickets at 171 leaving the West Indies to bat out the fifth and final day on Tuesday or score a further 285 runs with six wickets intact for an unlikely win.

No team has ever chased down more than the 418-7 West Indies managed against Australia at Antigua 13 years ago and on a weary last day pitch they will need a huge effort to stop Pakistan from taking an unassailable 2-0 lead.

Pakistan won the first Test – a day-night affair played with the pink ball – by 56 runs in Dubai.

Pakistan had declared their second innings on 227-2 at lunch, with Asad Shafiq on 58 not out (his 16th Test half century) and Younis Khan 29 to give their bowlers enough time to force a win.

At close Jermaine Blackwood was unbeaten on 41 and with him Roston Chase 17 not out as the two foiled Pakistan’s bowling during an unbroken 47-run stand for the fifth wicket.

The duo carried the fight initiated by opener Kraigg Brathwaite who scored a fighting 67 with six boundaries and a six.

Brathwaite and Marlon Samuels (23) had added 49 for the third wicket but both fell in the space of 12 runs, Samuels giving a return catch to leg-spinner Yasir Shah while Brathwaite trapped leg-before wicket by Mohammad Nawaz.

Brathwaite had completed his 11th half-century with a three run drive off paceman Sohail Khan — his first in this series.

West Indies’ task of saving the Test was made even more difficult after they lost Leon Johnson (nine) and Darren Bravo (13) with the total on 63.

Johnson tried to sweep a delivery from Shah only to drag it on to his stumps after hitting the bat and glove.

Bravo, who scored a fighting 116 in Dubai, slashed a drive off fast bowler Rahat Ali straight to point where Mohammad Nawaz held a head high catch.

Pakistan wicket-keeper batsman Sarfraz Ahmed said: “We would have liked five down instead of four. But we are in a commanding position and are sure that we will win the match tomorrow.”

Pakistan added 113 runs in the first session to set up their declaration.

Shafiq scored his second fifty of the match with three boundaries after Azhar Ali was dismissed for 79.

Resuming at 114-1 Pakistan were unable to score quick runs as West Indian captain Jason Holder kept a tight field, with only five boundaries in the session.

Ali, who scored a career best 302 not out in Dubai, edged Miguel Cummins to slip where Holder took a sharp catch for the fast bowler’s first wicket in the series.

Ali hit five boundaries during his 137-ball stay at the crease.

West Indies bowlers tried valiantly for more wickets but spurned a review when Holder trapped Younis in front of the wicket but television replays showed the ball was missing the stumps.

The third and final Test will be played in Sharjah from October 30.