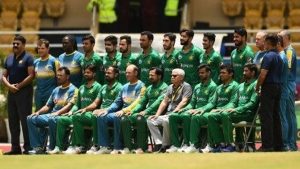 Pakistan’s cricket team members pose for a group photo before the start of the final of four-T20I-match between West Indies and Pakistan at the Queen’s Park Oval in Port of Spain, Trinidad, on April 2, 2017.

PROVIDENCE, Guyana (AFP) — Pakistan beat West Indies by 74 runs in the second one-day international on Sunday to level the three-match series at 1-1.

Pakistan made 282-5 with Babar Azam hitting an undefeated 125 before fast bowler Hasan Ali claimed 5-38 as the home side, with skipper Jason Holder scoring 68 not out, were dismissed for 208.