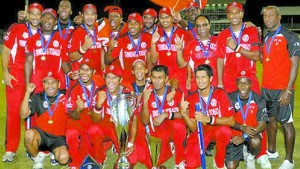 The 33-year-old seamer finished with five for 56 to help reduce Jamaica to 215 all out off 49.1 overs, crippling their pursuit of 233 for victory at Queen’s Park Oval.

Opener Nkrumah Bonner stroked 51 at the top of the order, Dave Bernard Jr got 40 and Andre McCarthy, 37, while John Campbell hit 26.

Seamer Kevon Cooper chipped in with three for 34 to support Emrit.

Earlier, T&T were guided to 232 all out off 49.3 overs by Darren Bravo’s 55, with support coming from his West Indies teammate Kieron Pollard with 41.

The victory followed on from Friday’s five-wicket victory over West Indies Under-19s.

Sent in, Red Force lost the attacking Evin Lewis cheaply for five in the fourth over with the score on eight and required Darren Bravo’s half-century to provide stability.

He hit eight fours and a six off 82 deliveries, adding 34 for the second wicket with opener Nicholas Sookdeosingh (19) and 31 for the third wicket with Jason Mohammed (six).

Miller struck, prising out Sookdeosingh and Mohammed, while Darren Bravo fell to leg-spinner Damion Jacobs to leave Red Force on 105 for four in the 26th over, but the experienced Dwayne Bravo and Pollard came together in a positive 58-run, fifth-wicket partnership to steady the innings.