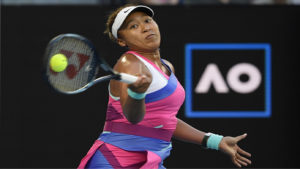 MELBOURNE, Australia (AP) — For the first set, Naomi Osaka’s rediscovered love of the game meant it was anything but fun for Madison Brengle in the second round of the Australian Open.

The defending champion conceded only four points in the first four games Wednesday and rifled forehand winners seemingly at will as she breezed to 6-0 in a mere 20 minutes.

The second set started with Brengle celebrating a service hold like she’d finished a long-distance race, but gradually the No. 54-ranked American’s keep-the-ball-in-play strategy ground down Osaka to a stage where she finally converted a break-point opportunity — after missing her first nine chances.

That triggered a change in the former No. 1-ranked Osaka, who responded by breaking back immediately and reeling off the last nine points to complete a 6-0, 6-4 victory. She finished with 37 winners and 32 unforced errors.

Osaka will next face Amanda Anisimova, a 20-year-old American who beat Olympic gold medalist Belinda Bencic 6-2, 7-5. The winner of that is likely to face top-ranked Ash Barty in the fourth round.

Osaka won the Australian Open last year, her fourth Grand Slam title, but then withdrew from the French Open and skipped Wimbledon as she took a break for her mental health. She then was ousted early at the U.S. Open.

After a long off-season to reset, she’s unbeaten in five matches in Australia this year.

Asked how she rated her form, Osaka said that’s not how she’s approaching things.

“Honestly I’m trying not to do that,” she said in an on-court TV interview. “I’m a bit of a perfectionist. If I compare myself with the past, I’ll never be satisfied.

“The goal for me is just to have fun … (and) I think we’re accomplishing that.”

Since the draw for the first major of the year was made, a big focus has been on a potential encounter between Osaka and Barty, the 2021 Wimbledon and 2019 French Open champion who is aiming to be the first Australian woman since 1978 to win her home championship.

Barty was front and center when the tournament celebrated its inaugural First Nations Day, albeit only for 52 minutes as she beat 142nd-ranked qualifier Lucia Bronzetti 6-1, 6-1.

“It was nice for me to be a part of it in a way that I feel most comfortable,” Barty, who has Indigenous heritage, said of the day dedicated to the Aboriginal and Torres Strait Islander people of Australia. “Out on the tennis court is how I express myself as an athlete, it’s how I’m able to express myself as a person as well.

“On a day we’re bringing cultures together, bringing people together … it was great for me to be able to play a small role doing what I love.”