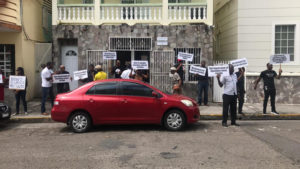 Candidates and supporters of the Opposition St. Kitts and Nevis Labour Party staged a protest in front of the Electoral Office on Central Street Friday morning, claiming an unfair and corrupt system that is disenfranchising supporters of the opposition.

Freedom Fm observed more that 20 protestors on the scene bearing placards, including Labour Party candidates and other party members.

Opposition Senator Nigel Carty outlined some of the issues that led to the protest action.

“We are protesting because after several months of interfacing with the electoral office, in particular the Supervisor of Elections and the office manager since Mr. Patrick Williams was here. We have not had any positive response in relation to the concerns that we’ve had. For example we’ve had the removal of names from the voters list without due process- people’s names have simply disappeared; we’ve also had the non-publication of the monthly lists, which is a requirement by law. The electoral system has been set up in a way that it is people in the various communities who are part of making the process transparent so when people go to register their names should appear on the lists for the community where they belong, and people should be able to say well John Brown should or should not be registered here- therefore it triggers something to make sure the list has integrity.

“We’ve also had a report from the Electoral Office that the machine that would take pictures and print cards has been dysfunctional- this is over 6 months now, and we believe that it is inexcusable and so we’ve taken to the streets today to make sure we use yet another means to communicate to the public and the and to the Electoral Office and the government that this is unacceptable.”

“Over 100 names have been removed from constituency #4. We have already drawn this to the attention of the Supervisor of Elections. They removed these names and the persons whose names were removed do not even know they were removed, and the law says you have 7 days after a decision to remove your name in which to appeal that decision; but if you don’t know your name is off, tell me what opportunity you have to appeal.

“Injustice reigns in the Electoral Office.”

When asked if there had been any action taken by police to break up the demonstration, MP Liburd said while there was a visible law enforcement presence including officers taking photos, up until that point there had been no attempts to stop them protesting.

Freedom FM contacted Supervisor of Elections Elvin Bailey who informed that he is currently overseas. He did address the issue of the downed machine saying that the part had been ordered and once it arrives on island, the machine would be repaired and the printing of voter identification cards would hopefully resume in the very near future. He reiterated that not having that card would not prevent anyone from being able to vote in elections, maintaining that voter registration continues at the Electoral Office unobstructed.