Opposition: Citizens Being Kicked Off PAP For Political Reasons 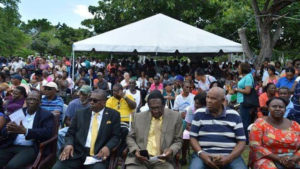 The Opposition St. Kitts Nevis Labour Party continues to allege corruption of the Poverty Alleviation Program (PAP), claiming now that persons are being removed from the list of beneficiaries based on political allegiance.

Speaking on a recent edition of Freedom FM’s Issues program, Dr. Terrance Drew, Labour Candidate for constituency 8 maintained that the government’s $500 payment to households earning less than $3000 per month was implemented as a political gimmick to engender the favor of voters. He said since the government had not called an early election as was allegedly the plan, persons are being kicked off the list of PAP beneficiaries, citizens who are qualified for the assistance.

“For example in my own constituency that they used to be on the program, got one payment, and after that they were thrown off the program. What happened is that the government was looking at a window in which they wanted to call the elections and so when that window was approaching – that was around the same time when the passport case involving the Leader of the Opposition was being heard.

“They lost the case; that took the wind out of their sail and so they had to postpone the elections, and in doing so a lot of people were on the PAP. And so they had to take people off of it, and a large number of persons were removed. I had a young lady called me and said ‘I live alone with two children; I was on the PAP and this government removed me.’ She said ‘Look at my pay slip, look at how much I make; I make even less than $2000 I need the PAP, but they have removed me’. I have a list of a number of persons from my constituency who qualify to be on this program, but because of political gimmickry and so forth they are not on it.”

Dr. Drew charges that the program lacks transparency and called on the Dr. Timothy Harris-led Unity government to give the taxpayers of the federation an account of the monies being spent on PAP.

“I want to look at the Poverty Alleviation Program in more detail; there’s no way the people of this country can verify the information with respect to this program, but of course we can only talk because the hard information is in the government and we cannot get access to it.

The PAP was launched in December 2018, and in April the government reported that over 3800 households in St. Kitts and Nevis were benefitting from the program, which is funded through the Citizenship by Investment (CBI) Program.