Only Two Percent of Rainfall Runs to The Sea, Explains Minister Maynard 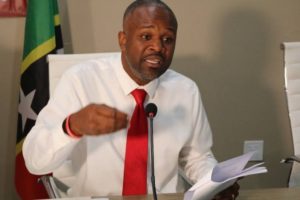 “With all this rainfall that we have had recently, why don’t we capture it in large storage tanks and prevent it from running away to the sea through our ghauts?”

It’s a question that many people have asked over the years as water shortages have increased over the past several years. In a statement on the Water Supply delivered by the Minister of Public Infrastructure, the Honourable Konris Maynard, on December 19, 2022, during the Budget Debate, he said that capturing additional rainfall is not a silver bullet.

Firstly, Honourable Maynard explained that when rain falls, as much as 80 percent of the water evaporates back into the atmosphere from the ground and plants. Eighteen percent goes into the ground, while only two percent runs into the ocean.

Even if the government constructed a seven-million-gallon water tank to store the rainfall, it still would not be adequate.

“By our current demand of roughly 7 million gallons per day, we would consume that water in one day or, at the very least, a few days if we were to merge it with our present capacity. It would then need to rain every one to three days to keep those tanks filled,” Minister Maynard said.

The extended dry spells that have persisted over the years make this an unrealistic prospect at this time.

“Therefore, one of our major problems is not storage, rather, a major problem is a constant renewable source of potable water,” the Minister indicated. “In fact, we can view our mountain ranges, skirted by our gently sloping lands, as one giant reservoir that captures 18% of the rainfall and deposits it into aquifers around the island. This is actually the best reservoir we have. Therefore, we must ensure that we continue to explore all our groundwater potential as I am advised we have explored just about 60% of the island’s capacity with 40% remaining untapped.”

The Government has re-engaged the services of Bedrock Exploration Development Technologies (BEAD) to continue groundwater well-drilling. Technicians are expected to arrive on December 27, 2022, in preparation for the start of drilling in January 2023.

Persons are strongly advised to conserve water to help reduce the demand on water aquifers that have dangerously low levels of water.