Obama’s Parting Gift to the Caribbean 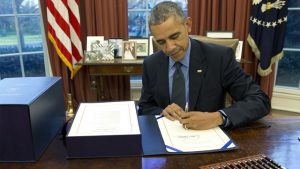 United States President Barack Obama is set to deliver a long awaited gift to the Caribbean before he leaves the White House in the coming weeks.

He is expected to sign into law legislation aimed at bolstering United States/Caribbean relations on a range of critical issues that was unanimously passed in the U.S. Senate on Tuesday.

The United States-Caribbean Strategic Engagement Act (H.R.4939), paves the way for the U.S Secretary of State and the U.S Agency for International Development to devise a multi-year strategy on security, energy, diplomacy and increased access to educational opportunities.

The landmark initiative was spearheaded by New York Democratic representative Eliot L. Engle, ranking member of the house committee on foreign affairs and South Florida Republican Representative Ileana Ros-Lehtinen, a former chair of the committee. It was passed earlier this year.

“It is long past time to have a multi-year strategy that will allow us to increase engagement with the Caribbean, especially when it comes to energy and security,” Engel told the Miami Herald.

His colleague, Ros-Lehtinen, added that it would create a win-win situation for the two critical partners – Washington and the Caribbean region.

“It is vital to work proactively and collaboratively with Caribbean nations to promote close cooperation in the areas of security, trade, illicit trafficking, and energy,” she said.

A congressional aide also told the Miami Herald that it was a small victory for the Caribbean, which has long lobbied for improved relations with Washington.

“It’s not a panacea, but a step in the right direction,” the aide said.