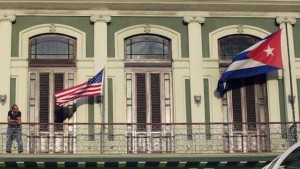 (Reuters) – President Barack Obama vowed on Tuesday to act quickly once he receives a State Department recommendation on whether to remove Cuba from the U.S. list of terrorism-sponsoring countries, a remaining obstacle to the restoration of relations between Washington and Havana.

With just days to go before a hemispheric summit in Panama where Obama will come face-to-face with Cuban President Raul Castro, he offered no clear sign of how he was leaning or the timeframe for his decision. He ordered the review immediately after announcing a diplomatic breakthrough with Havana on Dec. 17.

Obama, in a Reuters interview in early March, said he hoped the United States would be able to open an embassy in Cuba by the time of the April 10-11 Summit of the Americas, and U.S. officials have since said the review was being expedited.

But the lack of a decision so far on taking Cuba off the terrorism blacklist – something Havana has steadfastly demanded – has raised strong doubts about whether the review will be finished in time to make further strides toward normalization before the summit.

“As soon as I get a recommendation, I’ll be in a position to act on it,” Obama said in an interview with National Public Radio.

Obama gave no sense of where the administration is heading on the issue but made clear that his decision would be based not on “whether they engage in repressive or authoritarian activities in their own country” but on the “current activities of the Cuban government” with regard to terrorism.

Cuba was added to the list of terrorism sponsors in 1982, when it was aiding Marxist insurgencies. But it is currently aiding a peace process with Colombia’s left-wing FARC guerrillas.

“I think there’s a real opportunity here, and we are going to continue to make – move forward on it,” Obama said. “Our hope is to be in a position where we can open an embassy there, that we can start having more regular contacts and consultations around a whole host of issues, some of which we have interests in common.”

He added: “What I’m saying is, I’m going to be taking a very close look at what the State Department recommends.”