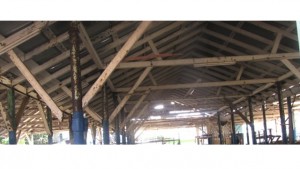 “I don’t think enough effort is being made for Port Maria,” Harris-Smiley told last Thursday’s sitting of the St Mary Parish Council.

She noted that the political representatives were not being proactive enough, even as she pleaded for more to be done to improve the state of the town and the welfare of its residents.

“The members of parliament do not have any interest in the people of St Mary…You as the mayor is not doing enough,” she told Mayor of Port Maria Levan Freeman.

“You are on a go-slow,” she added.
“We have things to be done here; we can’t let things look pretty,” said Harris-Smiley, who noted that she was tired of people taking to social media to speak of problems plaguing the parish.

She pointed to a number of concerns which continue to plague Port Maria and by extension the people of the parish.

Harris-Smiley’s concerns was one of the Port Maria Market.

She expressed concerns that work which should have started at the facility last year is yet to get underway, despite Jamaica Social Investment Fund being said to have provided $30 million for the project.

The councillor said the town is in a bad state as it relates to the congestion caused by vendors and motorists on the roads.

“I’m not saying that the condition of the market is why vendors are on the road, but it is a part of the problem,” she said.

She also pointed to the stagnant Otrum River in the town from which a stench is emanating.

“We need a lot of attention in St Mary,” she added.

Also drawing attention to the state of the Port Maria Market was councillor for the Gayle Division Jason James. He pointed out that a robbery took place in the facility last weekend where a vendor was robbed at gunpoint as she collected ‘partner money’ from people in the market after 8:00 pm.

Meanwhile, Mayor Freeman said the market will be a major part of the discussions he will be having with Minister of Local Government Noel Arscott when he meets with him tomorrow.

However, Jamaica Labour Party councillor for the Richmond Division Richard Creary pointed out that the matter of a new market in the town has been under discussion for the last five years.

In addition to discussions that he will be having with the minister, Freeman said operations have started in the town to get vendors off the street, an operation which is said to have been effective thus far.

When the the market was visited on Thursday, only a handful of vendors were inside. Those present lamented the state of the market.

“The market want fix up; you can’t run people and dem don’t have anywhere to go,” one vendor said.

She admitted that many of the vendors have opted to ply their trade on the road instead of in the facility.

“If they fix up the place more people would be in here,” she added.

A section of the market for fish vendors was empty and the vendor said the reason for this is becuase it is only one fisherman who uses it. The others are said to sell on the streets.

While the vendors called for the market facilities to be refurbished, they admitted that the condition was worst in the past with the market roof leaking heavily whenever it rains. However, some zincs on the facility have since been replaced.