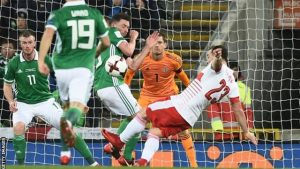 The referee who awarded a controversial penalty against Northern Ireland during their World Cup play-off defeat by Switzerland says he made a mistake.

Ovidiu Hategan ruled that Corry Evans blocked a shot with his arm during the first leg, despite replays showing the ball struck the player’s shoulder.

“It was a sad and unpleasant moment for me, sad because I made that mistake,” Hategan told Romanian media.

The Romanian will not be used as a referee at the World Cup in Russia.

World governing body Fifa has released the list of 36 match referees who will take charge of matches at this year’s tournament and Hategan has accepted that his decision during the first leg at Windsor Park may have played a factor in his omission.

“Unfortunately I’m not among the 36, but I’ll see if I’m going to be a video referee,” he added.

“Surely it has had a big influence and what happened in the play-off game. It’s not a secret and I’m not hiding behind words.

“In our world, the referees are the same as the goalkeepers – everyone sees the mistake.

“I’ve got over that moment, I’m a strong man. My family were there for me.”

Swiss defender Ricardo Rodríguez scored the spot-kick to secure the only goal of the play-off, which ended Northern Ireland’s hopes of qualifying for Russia.

Northern Ireland manager Michael O’Neill called for the introduction of video technology after the first-leg defeat.

“It’s just staggering in this day and age when the stakes are so high that something like that is a game-changer,” O’Neill said after the game.

“It [a VAR] should be used for anything that is a defining decision, which is clearly what we saw.

“A penalty given in those circumstances, a VAR would have cleared it up and said it’s clearly not a penalty.”

The Irish FA, one of the five members of the law-making body, the International Football Association Board, subsequently called for the use of video technology in competitive internationals.

“You have seen the results in other championships, but discussions will always be a lot of talk but I am firmly convinced that those big mistakes will be eliminated.”