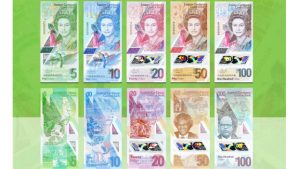 The Governor of the Eastern Caribbean Central Bank (ECCB) Timothy N. J. Antoine has advised that there are no immediate plans to make changes to the EC polymer notes and coins following the death of Queen Elizabeth the II.

Responding to a question during a live interview ‘Conversation with the Governor’ in Saint Vincent and the Grenadines, Governor Antoine said “nothing happens right now.” He further explained that there are three to four years of inventory or stock of EC polymer notes.

The Governor however noted that the passing of the Queen raises the question as to ‘what happens next?’ He said a conversation needs to take place where the region needs to decide ‘where we want to take our currency.’