No connection between Zika and microcephaly, new study claims 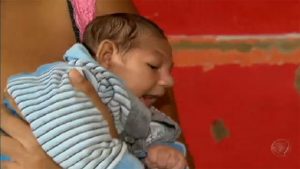 MASSACHUSETTS, United States, Wednesday July 6, 2016 – The absence of microcephaly in several countries impacted by the Zika virus raises serious questions about the assumed connection between Zika and microcephaly, according to a new study.

Scientists have been warning about the potential effects of Zika infection during pregnancy, with the US Centers for Disease Control and Prevention (CDC) revealing that Zika is linked to severe foetal brain defects such as microcephaly, as well as Guillain-Barre syndrome and other neurological complications.

A new study published in the New England Journal of Medicine nevertheless showed that there were no microcephaly cases found among almost 12,000 pregnant Colombian women who tested positive for Zika virus infections.

This finding was in stark contrast to the large number of confirmed cases of microcephaly in Brazil, where over 1,500 cases have been documented. At the same time, four cases of Zika and microcephaly were reported in Colombia for women who were symptomless for Zika infections and therefore not included in the study.

The Zika and microcephaly cases that were not part of the study indicate that there are many more pregnancies affected by Zika without symptoms. Because there are four cases of microcephaly with Zika, and none in the study, there should be about four times as many cases of Zika that are unreported. This means there are at least 60,000 Zika-infected pregnancies in Colombia, the study suggested.

The New England Complex Systems Institute (NECSI) in Cambridge, Massachusetts, analysed the data and showed that the four cases of Zika and microcephaly that were observed are just what would be expected given that the expected microcephaly rate for countries with no reported Zika infections of 2-in-10,000 births gives exactly four cases.

The study also noted that until April 28 there had been a total of about 50 microcephaly cases in Colombia, of which only four had been connected with Zika. NECSI has consequently urged experts to reassess the microcephaly cases in Brazil for the possibility that a pesticide used to kill mosquitoes could be responsible for the birth defects in the nation.

NECSI emphasized the importance of reevaluating the Zika cases in Brazil since the pesticide pyriproxyfen is known to cause microcephaly as it cross-reacts with retinoic acid. Pyriproxyfen is commonly placed in drinking water in some parts of the country to kill mosquito larvae carrying the Zika virus.

Meanwhile, fears over the presumed Zika-microcephaly link in Latin America have reportedly sparked demand for abortion pills purchased online. A new study that was also published in the New England Journal of Medicine showed an increasing number of women are opting for “extralegal” ways to terminate their pregnancies