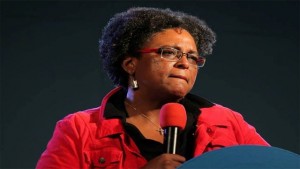 BRIDGETOWN, Barbados, Tuesday May 9, 2016 – A no-confidence motion against the Freundel Stuart administration will be debated in Parliament today. Barbados Labour Party (BLP) leader Mia Mottley said the motion, which was laid in Parliament on May 3, was prompted by the persistent crises facing the country, which she said was caused by poor governance.

It is the third no-confidence motion filed by the BLP against the Democratic Labour Party (DLP) administration DLP since it took office in 2008. The motion addresses high public sector debt; economic downturn; downgrades by international credit rating firms; declining investment; increase in unemployment; increase in taxes; increase in the cost of living; government’s failure to pay income, corporation and Value Added Tax refunds; a deterioration in the labour climate, and the administration’s lack of consultation and discussion with the public, among a range of issues.

The BLP says it has no confidence in the current government – and it wants the Parliament to agree through passing the motion – “to properly and effectively manage the affairs of state over the next 22 months of its constitutional term of office, in the best interest of the country and its people.” Prime Minister Stuart, whose party is in its second consecutive term in office, has already dismissed the motion. The DLP has a 10-seat majority in the House of Assembly, winning 20 seats in the last election to the BLP’s 10.