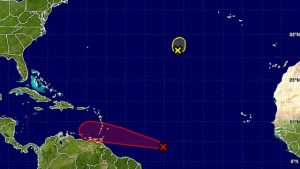 THE FIVE-DAY FORECAST OF THE TROPICAL WAVE (RED) WHICH LOOKS SET TO IMPACT THE CARIBBEAN THIS WEEK AND THERE’S A VERY GOOD CHANCE IT COULD DEVELOP INTO A STORM. THE REMNANTS OF TROPICAL STORM LISA ARE ABOVE.

With Karl having passed Bermuda and losing its storm status, eyes are now on a potential Tropical Storm Matthew that could move into the Eastern Caribbean this week.

Invest 97L, as the tropical wave has been designated for now, is currently well east of the Windward Islands and is likely to become a tropical depression by the middle of the week, the National Hurricane Centre (NHC) in Miami said.

The system has a 90 per cent chance of becoming a storm by Friday.

In its 8 a.m. advisory, the NHC said Invest 97L was about 1,100 miles east-southeast of the Windward Islands and continuing to show signs of organization.

“Environmental conditions are expected to be conducive for development, and a tropical depression is likely to form around mid-week while the low moves westward to west-northwestward at 15 to 20 mph. Interests in the eastern and central Caribbean Sea, including the northern coast of South America, should monitor the progress of this system,” the hurricane centre cautioned.

Regardless of development, it added, heavy rains and strong gusty winds should spread over the Windward Islands and portions of the southern Lesser Antilles beginning late tomorrow or Wednesday.

The NHC has tentatively scheduled the first Hurricane Hunter mission into Invest 97L for tomorrow afternoon.

And the remnants of Tropical Storm Lisa were still hanging around in the Atlantic. Forecasters said what’s left of the storm had some tropical storm force winds, but the centre appeared elongated and was expected to weaken to a trough of low pressure.

The NHC put the chances of redevelopment at zero.