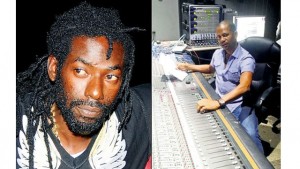 JUST after images of incarcerated deejay Buju Banton entertaining his fellow inmates at a Georgia correctional facility in the United States went viral on social media, comes a new song from the artiste.

Released one month ago, the track is entitled My Favourite Song. Produced by locally based Stone Cold Records, the single features Marco.

Head of Stone Cold Records, Mark Hudson, said My Favourite Song was recorded in 2001 but never released. He decided to release the song to maintain a positive image for Buju Banton amidst “constant negativity about the artiste”.

“Buju has always recorded for Stone Cold. It was the only other label he worked for apart from Penthouse and Gargamel Music. It was voiced long before he went to jail. At the time, he was experimenting with a new sound — faster beats — and so this has a kind of house beat mixed with ska,” said Hudson. “I decided to take out the track, dust it off, and drop it, as I think everything about this really great artiste is always negative. It is always about his incarceration and not enough about his music.”

The producer is not in direct contact with the deejay, but said he sent word about the release to him.

Hudson told the Jamaica Observer that he had stopped producing music for a while. He explained that My Favourite Song is the direction he wanted to take his music.

“Jamaica is no longer just about reggae… we are a music country. Look at the track (Cheerleader) that just made it on Billboard by Omi, it wasn’t a reggae or dancehall sound. I want to take my music to the pop charts… I want to get it into the mainstream,” said Hudson.

Stone Cold Records and Buju Banton previously collaborated on tracks such as Five-O and Ready Body.

Buju Banton (given name Mark Myrie) is currently serving a 10-year sentence in a US Federal prison on cocaine charges. He scheduled to be deported to Jamaica in 2019.