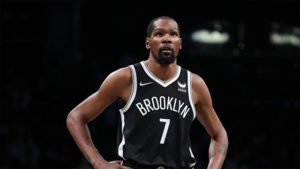 Brooklyn Nets forward Kevin Durant has played in his share of “trap games” throughout his career. Monday against the Washington Wizards was one of them since the Wizards were missing arguably their best player in Bradley Beal.

However, as he learned from watching the Nets’ bench players beat the Indiana Pacers’ full squad, Durant knew to never underestimate any opponent and you will get embarrassed. He followed his own advice by dropping 30 points in a 112-100 win over the Wizards as the Nets showed throughout the game that they were taking this game seriously no matter who was playing.

Durant spoke postgame about how the Nets mentally prepared for this game by not taking absences for granted:

“We (the Nets) talked about this being a trap game. You got some guys injured, I mean, we played a trap game against Indiana where they might’ve came in against us and relaxed a bit. We didn’t want to make that same mistake and come out and underestimate these pros out here because they’re pros and they’re all talented”

The Nets’ next game is Friday at the Toronto Raptors.