Home / Sports / Nets have critical offseason ahead, and unreliable stars leave no margin for error

Nets have critical offseason ahead, and unreliable stars leave no margin for error 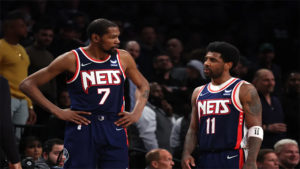 NEW YORK — Kevin Durant is as bankable of a commodity in the NBA as anyone during normal times, discounting the fact he’s still recovering from a sprained MCL in his left knee he suffered in January probably added somewhat to his underwhelming playoff performance.

He looked very much like the MVP and the game’s most dangerous player before the injury (29.3 points, 7.4 rebounds, 5.8 assists) and took on a heavy load (at least 39 minutes in 15 of 23 games after his return) to drag the Nets past the play-in tournament.

But normal times don’t last forever, and if he’s approaching the time of his career where the years are more precious than precocious, the Brooklyn Nets don’t have the time to trifle with the future right in front of them.

Durant vehemently supports Nets head coach Steve Nash in front of the public while endorsing him behind the scenes, according to various reports, and he’s usually socially transparent about such matters.

We should all want a friend like Durant, who refuses to abandon Kyrie Irving despite Irving’s best efforts to derail their on-court partnership.

His unpredictability is what has defined this franchise since his arrival, having influenced the public perception of the Nets even more than Durant’s singular brilliance. And here’s the kicker — Irving, as flighty as he is, is easier to peg than the curious case of Ben Simmons.

The past several weeks and months have made two things clear: First, as much as we in the public like to say we’re sensitive to the topic of mental health in sports, it seems we are ill-equipped to truly discuss it or apply it in real time.

In hindsight, it’s much easier because accountability is applied to make us look like an evolved species. Looking at colorful outfits on the bench and smirks from Simmons only confirm our biases and beliefs, that he’ll do anything to avoid the confrontation that comes in the form of basketball competition.

On the other hand, the messaging from Simmons has been so inconsistent it appears he’s either clueless of how the people who matter think of him, or he could very well not be built for the cauldron that is professional sports.

If he requires perfect conditions to get out on the floor, or to stay there, there’s not an environment the Brooklyn Nets or any other franchise can provide for him that will be good enough.

Pressure is part of the package. Teams and players need to know, in order to properly function, that players with high and low profiles will be dependable and reliable. Playing through soreness and pain is the pact that’s often made — a pact that’s totally separate from trying to perform through potentially debilitating injuries.

That’s not to say Simmons doesn’t belong in the NBA or should shield his mental struggles. It does mean he lacks credibility from the NBA world at large and will have to regain it back through true equity — a credibility many felt was teetering before last summer’s meltdown in the second-round playoff series in Philadelphia.

But when it’s added together, it leaves the Nets in position for no margin for error; Irving’s extended absences obscure the evaluation of his on-court fit or even his potential aging. Simmons’ inactivity prevents the front office from team building, and his history of being a player who hasn’t grown since his rookie year can’t allow the Nets to envision a bigger role as Durant would presumably enter his late 30s.

Irving boasted he would, essentially, be part of a leadership committee on decision-making with team governor Joe Tsai and general manager Sean Marks — which insinuates he’s ready to make a real investment into the franchise, when the evidence of the last three years suggests otherwise.

He just turned 30, and although sports medicine has made tremendous strides through the decades, it would require a great leap to assume Irving would be in better health as the years progress.

His relative health this season stemmed from being a part-time player due to New York’s COVID-19 vaccine mandate, and when it came time to ramp it up for the playoffs the physical task became tougher — both from observing Ramadan and not being used to the rigors of what basketball requires.

His performances decreased as the four-game sweep against the Celtics wore on and cannot be ignored by management. He shot 37% after Game 1 and 18% from three. Durant and Nash caught most of the attention, but Irving underwhelmed when most assumed his basketball excellence would be more of a certainty than his attendance.

Neither can be viewed as a sure thing moving forward, which further complicates things for the Nets.