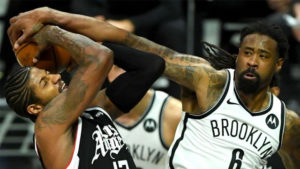 James Harden scored 37 points and the Brooklyn Nets held off a furious fourth-quarter rally to edge the Los Angeles Clippers 112-108 on Sunday night for their season-best sixth victory in a row.

The Nets wrapped up a 5-0 trip, beating Golden State, Sacramento, Phoenix, and both Los Angeles teams to complete their longest undefeated single trip in franchise history. All but two of the wins were by double digits. They’ve now defeated West teams eight straight times.

Paul George led the Clippers with 34 points. Kawhi Leonard had 29 points on 9-of-19 shooting. Ivica Zubac finished with 13 points, but no other Clippers reached double figures. Lou Williams was 2 of 11, and Marcus Morris 2 of 7.

The Nets dominated in the paint, outscoring the Clippers, 60-38.

Brooklyn got off to a quick start in the fourth. Harden breezed past Zubac to score, Joe Harris hit a 3-pointer and Harden made a pair of free throws for a 15-point lead — its largest of the game.

Patrick Beverley fouled Jeff Green from behind with 2:50 remaining. Green crumpled to the floor and the Clippers challenged the call, but lost. Green kicked over a drink cooler on his way off the court.

Brooklyn stretched a seven-point halftime lead to 11 points in the third. The Clippers closed within four points on a basket by George, but the Nets quickly got back to double digits on a 3-pointer by Harris.

Irving scored 12 points — matching his total from the first half — to send the Nets into the fourth leading 89-79.

Clippers: Previously lost to the Nets by four points Feb. 2.