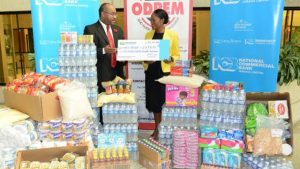 The National Commercial Bank (NCB) has donated approximately $2 million in cash and supplies to the Haiti relief effort.

The contribution, from the bank’s staff, was handed over to the Office of Disaster Preparedness and Emergency Management (ODPEM) on Thursday at the NCB Atrium offices in Kingston.

Director general of ODPEM, Major Clive Davis, who accepted the donation, said that NCB is among several corporate entities and members of the public who have already contributed to the relief effort.

He is urging Jamaicans to continue to give. “We are still collecting donations. Members of the public can take items to the ODPEM offices anytime between 8:00 am and 4:00 pm on weekdays and we will collect them, store them and ensure that they get to the people who are most in need in Haiti,” he said.

He said it is expected that the donations should reach Haiti within the next five to six days.

“Businesses are still open [in Haiti] so we prefer cash because we can actually spend the cash in Haiti. The cash can be used to stimulate the economy, to get persons back into work and put food on their tables. In addition to that, we would never want to end up in a situation where we have products that we have to ship, that is going to cost us more to ship them than the products themselves,” he pointed out.

Chief executive officer of NCB Foundation, Nadeen Matthews, said that as soon as pictures showing the impact of Hurricane Matthew on Haiti began circulating, staff members across the country started to enquire how they could assist.

“Right away,we opened an account and told staff members where they could drop off supplies. Haiti, being our neighbours and given our regional aspirations, we also have an interest in ensuring that they are doing okay,” she shared.

Last month, Haiti was pounded by Hurricane Mathew, a Category Four storm that left hundreds dead and others homeless and in need of aid.