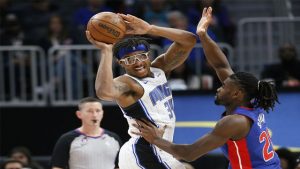 Alec Burks scored a season-high 32 points, Saddiq Bey added 28 and the Detroit Pistons overcame the ejection of two players after a scuffle to beat the Orlando Magic 121-101 in the NBA on Wednesday night and snap a six-game losing streak.

Killian Hayes and Hamadou Diallo were thrown out after the fight just before halftime. Moritz Wagner was tossed for Orlando and took a shot to the back of the head from Hayes and appeared to be briefly knocked out.

Jalen Duren finished with seven points and 18 rebounds for the Pistons, who got 76 points from their bench.

Franz Wagner had 19 points for Orlando, which lost on back-to-back nights after winning eight of nine.

With 33 seconds left in the first half, Moritz Wagner hip-checked Hayes into the Pistons bench as they chased a loose ball. With Wagner facing the players on the Detroit bench, every Orlando player in uniform raced to the spot.

Wagner was ejected for a flagrant foul, while Hayes and Hamadou Diallo were ejected for their actions in the aftermath. Hayes got back up and struck Wagner in the back of the head, knocking him into the bench.

ATLANTA (AP) — Kyrie Irving scored 15 of his 28 points in the fourth quarter, Kevin Durant had 26 points and a season-high 16 rebounds and Brooklyn Nets beat Atlanta Hawks for their 10th straight victory.

The Bulls trailed by 15 early in the fourth quarter, only to pull even in the closing minute of regulation. DeRozan scored 10 in overtime, Nikola Vucevic hit a 3 in the extra period and the Bulls beat one of the NBA’s best teams after losing to one of the worst — Houston — two nights earlier.

Antetokounmpo matched a season high with 45 points and set one with 20 rebounds. He also committed two turnovers in the closing seconds of regulation, and the Bucks extended their season-high losing streak to four.

NEW ORLEANS (AP) — Zion Williamson scored a career-high 43 points, capping it with New Orleans’ final 14 points in the last 2:44, and the Pelicans outlasted Minnesota Timberwolves for their fourth straight victory.

Anthony Edwards, who scored 27 points for Minnesota, missed a baseline fade for the win as time expired in a game in which the Wolves led most of the way, and by as many as 11 points, before losing their fourth straight.

Trey Murphy III scored 21 points, going 5 of 6 from 3, and CJ McCollum had 20 points for the Pelicans. Jonas Valanciunas had 12 points and 11 rebounds. D’Angelo Russell had 27 points for Minnesota.

SACRAMENTO, Calif. (AP) — Malik Monk scored 33 points, including the tiebreaking free throw with 0.7 seconds left, and Sacramento Kings came back from down 19 points late in the third quarter to beat Denver Nuggets.

Nikola Jokic scored 40 points for Denver but missed a 3-pointer at the top of the key as time expired.

De’Aaron Fox had 31 points and 13 assists, while Domantas Sabonis returned to the lineup with 31 points, 10 rebounds and five assists. The Kings had lost three of four at home.

The Nuggets played without Jamal Murray, Aaron Gordon and Bruce Brown. They had their five-game winning streak snapped.

Ty Jerome hit a go-ahead 3-pointer with 5:18 to play after his own steal, then made a key rebound to help set up Donte DiVincenzo’s 3 the next time down as Golden State got another big performance from the backups.

DiVincenzo scored 19 points and Jerome 17 with the Warriors completing a back-to-back minus starters Stephen Curry, Klay Thompson and Andrew Wiggins.

Lauri Markkanen scored 29 points and had seven 3-pointers and a season-best 16 rebounds for the Jazz.

LeBron James had 27 points, nine rebounds and six assists for the Lakers, playing on the second night of a back to back. Russell Westbrook and Dennis Schroder each had 15 for the Lakers.

Kristaps Porzingis and Kyle Kuzma each had 22 points for Washington as three-time Wizards All-Star Bradley Beal sat out with hamstring soreness.