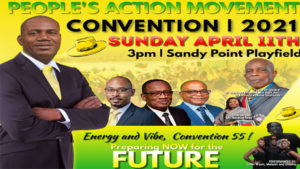 The People’s Action Movement (PAM) is all geared up to host its 55th Annual National Convention under the theme “Preparing Now for the
future!”
This auspicious occasion, with a meaningful slogan “Energy and Vibe, Convention 55,” will be held on Sunday 11th April, 2021 at the Sandy Point Play Field, at 3:00pm.

The Annual Delegates’ Convention, which usually takes place a day or more prior to the
National Convention, will this year, be held at the PAM Headquarters on Lockhart Street, Basseterre, just hours before the National Convention. All positions, with the exception of the General Secretary, which is an appointed position, will be up for reelection. Ms. Natasha Grey was appointed General Secretary in 2019 by the Leader of the PAM, the Hon. Shawn Richards.

The very first Prime Minister of the Federation, the only living National Hero and
Founder of the People’s Action Movement, Dr. the Right Excellent and Right Hon. Sir Kennedy Alphonse Simmonds, will be the Featured Speaker at the National Convention. Sir Kennedy Simmonds will deliver a powerful and inspiring message surrounding the theme, “Preparing Now for the Future.”

Entertainment includes performances from our home grown Artistes Chioma, Melanin, and Collin Wyatt, with a special appearance from Enid Lawrence, who each year embraces us with her exquisitely beautiful Party poems.

This Convention will be one that will resonate and be talked about for years to come. The LARGEST, STRONGEST, FEARLESS Political party, PAM has set the stage for a Convention like no other, one that you will always remember.

The 55th National Convention will be streamed live on PAM’s Facebook Page and Youtube Channel and carried live on WINNFM and Freedom Radio. For the persons attending, please note that ALL Covid-19 protocols will be observed.

Save the date as we are eagerly waiting to see you there!