My marathon innings was to frustrate Pakistan and setup victory run, says Bravo 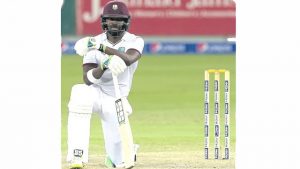 West Indies batsman Darren Bravo reacts after his dismissal for 116 runs on the final day of the first day/night Test against Pakistan at the Dubai International Cricket Stadium in the Gulf Emirate on Monday.

Pakistan pulled off a 56-run win at Dubai International Cricket Stadium to upstage Bravo’s magnificent 116 on the final day under lights, as the West Indies chased a come-from-behind victory.

“It was a situation where I actually wanted to bat out the entire day. I know as long as I batted and spend a lot of time in the middle, definitely it was going to frustrate the Pakistanis and set up the game for us,” said the elegant left-hander.

“I just wanted to bat there and have couple partnerships and that would have made it much easier.”

West Indies trailed Pakistan for three days until leg-spinner Devendra Bishoo claimed career-best figures of eight for 49 on the fourth day, to send Pakistan tumbling to a paltry 123 in their second innings to set up a dramatic finish.

Bravo’s century carried West Indies into the final hour on the fifth and final day and gave the regional side hope of an opening win.

But Jason Holder’s men were dismissed for 289 in their second innings, with 12 overs left in the contest.

“It was all about spending time in the middle and waiting to launch in the end. All in all it was a tremendous effort, the guys really fought through the entire Test match,” said Bravo.

“If you look back at the first two days in the entire Test match, we were totally outplayed. The way Bishoo bowled put us in good stead to come out on top.”

Bravo’s century followed up his first innings of 87 — which was made in 398 minutes off 258 balls, with nine fours and a six.

“Some days, you may score faster. Some days you have to stick it out. It is not always glorious shots. Sometimes you have to show that sort of determination and discipline to get the job done,” said Bravo.

“I tried that in this game — it worked. Who knows? The next game can be probably fluent. You never know. But at the end of the day, I am putting in a lot of work in the nets and I am really happy to reap the rewards, especially in this game.”

West Indies will now move on to Abu Dhabi for the second match of the series starting on Friday.