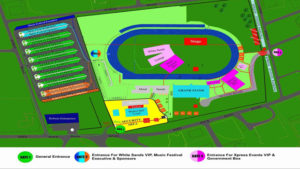 The St. Kitts Music Festival Committee on Thursday officially released a site map showing the layout for the event at its new venue, the Kim Collins Stadium, which has elicited public criticism in some circles.

Damion Hobson, serving in his second year as chairman of the Music Festival Committee, told Freedom FM he is confident that once patrons get there, they will have a great time.

“It’s going to be an excellent venue. I believe once people get in the venue on Thursday and get a feel of it they’re gonna be happy. It’s really going to be a fantastic venue, well laid out, no bad views in there, and you can actually sit in the stands and see the show. So I think for everyone it’s gong to be a fabulous experience at the Kim Collins Stadium.”

Addressing the issue raised about where certain VIP tents are located, Damion Hobson, serving in his second year as chairman of the Music Festival Committee, told Freedom FM that all of the tents would offer patrons a good view of the stage.

“The organizers of the private VIP tents were involved in the decision-making. I must say that no tent is far from the stage; it’s still a cozy venue and I think everybody is going to have a perfect view whether you’re in Carambola or Xpress VIP or the Ministry of Tourism box- all have excellent views of the stage. We went with Rent-a-Amp and we have a 100-foot stage, it’s a higher stage than normal. There’s no bad spot at the Kim Collins Stadium.”

Hobson explained that because it’s a new venue some persons may not fully grasp the logistics until they arrive at the stadium. He noted that there will be three entrances, four bars on the inside of the grounds as well as bars at the entrance area with a large flat screen so patrons catch watch the show. The general admission entrance is located at the front of the stadium on the Bird Rock Road, where tickets will be sold and patrons can purchase Music festival paraphernalia and locally made products at a vendors’ community just on the inside of the facility.

The Chairman encouraged persons to familiarize themselves with the layout plans, traffic arrangements and other important information relating to accessing the venue on show nights.