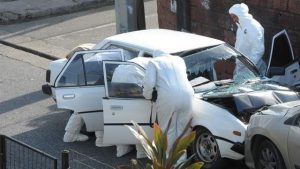 Flashback, 2010: Crime scene investigators at the scene of a murder in Tunapuna

THE murder toll in Trinidad and Tobago is inching towards the 400 mark with 68 days left in the year.

This number is already higher than the entire number of murders committed in 2007, and when compared with the annual figures since then, 2017 already has more murders than 2011, and 2012, when the tolls stood at 354 and 383, respectively.