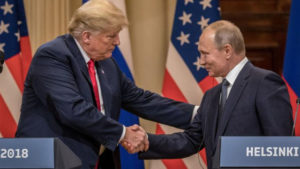 Bernstein, who is renowned for his coverage of the Watergate scandal that led to the resignation of former President Richard Nixon, appeared on CNN’s Reliable Sources on Sunday to discuss two bombshell reports released this weekend, one from The New York Times and one from The Washington Post, which revealed new details about whether or not Trump and his aides have colluded with Russia.

The Post reported that Trump has gone to “extraordinary lengths” to conceal direct conversations he has had with Russian President Vladimir Putin. The Times article revealed that the FBI opened a counterintelligence investigation into Trump after he fired former bureau director James Comey in 2017, suspecting the president could be working on behalf of Russia. Trump has angrily denied allegations that he worked with Russia and has regularly attacked the media for reporting on the investigation. But Bernstein slammed Trump’s dismissal of the probe.

“This is about the most serious counterintelligence people we have in the U.S. government saying, ‘Oh, my God, the president’s words and actions lead us to conclude that somehow he has become a witting, unwitting, or half-witting pawn, certainly in some regards, to Vladimir Putin,’” Bernstein explained during his appearance on Reliable Sources .

“From a point of view of strength… rather, he has done what appears to be Putin’s goals. He has helped Putin destabilize the United States and interfere in the election, no matter whether it was purposeful or not,” the journalist added. He then explained that he knew from his own high-level sources that Mueller’s report would discuss this assessment.

“And that is part of what the draft of Mueller’s report, I’m told, is to be about,” he said. “We know there has been collusion by [former national security adviser Michael] Flynn. We know there has been collusion of some sort by [Trump’s former campaign chairman Paul] Manafort. The question is, yes, what did the president know and when did he know it?”

Trump has defended himself against such reports, arguing, inaccurately, that he has taken a hardline stance against Russia.

“I have been FAR tougher on Russia than Obama, Bush or Clinton. Maybe tougher than any other President. At the same time, & as I have often said, getting along with Russia is a good thing, not a bad thing. I fully expect that someday we will have good relations with Russia again! [sic],” he wrote on Twitter on Saturday.

However, the president’s 2016 campaign remains the subject of a special investigation led by Mueller. Several former high-ranking Trump aides have been indicted in the probe and last week, it was revealed that Manafort shared confidential polling data with an associate linked to Russian-intelligence.

Trump’s administration recently moved to remove financial sanctions on an ally of Putin, and has recently pulled troops out of Syria — a long-standing demand from the Russian President.