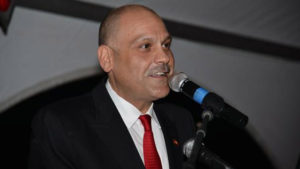 The painful cries of an elderly woman caught on video as she was being mistreated by her caregiver, have resonated throughout social media and have sparked outrage from many people who have seen the footage, including a former government minister.

The Parliamentary Representative for the Constituency of St Peter, Asot Michael described the female caregiver’s action as “wicked, unconscionable and ungodly”, and urged the Ministry of Social Transformation and the police to immediately begin investigations into the matter.

In the widely circulated video, a woman (who is being referred to as Nathalie) dressed in nurses’ scrubs, is seen causing great pain and discomfort to an elderly woman (whose name we understand is Annette Simon) who is reportedly recovering from hip surgery.

The caregiver, Nathalie, was seen vigorously pulling and pushing Simon’s leg while telling her that she had to “exercise” the limb. The helpless woman, who was lying on a bed, could be heard crying out in pain and pleading with the woman to stop.

Many people who have viewed the footage expressed their disgust and anger with the actions of the “caregiver”; others said it was too painful for them to watch; and some people commented that it brought them to tears.
Meantime, the alleged abuser — a trainee attached to the government’s job programme has been sent back to the Labour Department, which had recommended her for the job — after the Ministry of Social Transformation deemed she was unfit to provide care for the elderly.

Minister of Social Transformation, Samantha Marshall condemned the behaviour of the woman, “Nathalie” saying: “It’s not an action that we condone. As soon as we became aware of the matter, the Permanent Secretary and the head of the relevant divisions investigated the matter and took action.

“What is known to be is that the young lady is from the job programme which is run by the Ministry of Labour and based on that and the fact that she did not meet the standard of service that we in the [Ministry of Social Transformation] pride ourselves with, we determined to have her return to the job programme and it is for them to decide how they will wish to take any further action.”

Last week, the circulation of another video showing a male student of one of the secondary schools on island perpetrating an act of bullying against another, stirred similar outrage from the public.

In that video the aggressor was seen in a classroom attempting to “strangle” his victim with the cord from an electric fan, while others could be heard egging him on.

The Ministry of Education subsequently issued a release condoning acts of bullying in schools and also disclosed that several students have since been suspended as that particular matter is being investigated.