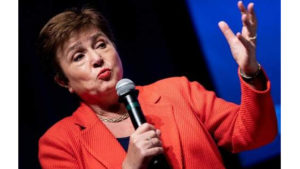 WASHINGTON, United States (AFP)— A new IMF study confirms what many women already knew: mothers shouldered much of the pain and suffered an outsized economic impact from the COVID-19 pandemic.

In “the world of work, women with young children have been among the biggest casualties of the economic lockdowns,” IMF chief Kristalina Georgieva said in a blog post Friday.

The study by International Monetary Fund economists, which looked at the experiences of mothers in the United States, Britain and Spain, showed why it is “crucial” to provide added support to mothers, Georgieva said.

That includes prioritising reopening schools and providing monetary support for immediate needs and for retraining after some jobs disappeared, she said.

The report found that among all workers in the United States, women were affected more than men, while in Britain, it was the other way around, and in Spain, men and women shared similar levels of pain, she said.

“Despite these differences, all three countries shared one thing in common: mothers of young children have been disproportionately affected by the lockdown and resulting containment measures,” Georgieva said.

With school closures and remote learning “many women — who were largely shouldering the weight of childcare and housework even before the pandemic — left their jobs or cut the number of hours they worked.

US government data show nearly two million women over the age of 20 left the labor force during the pandemic and the unemployment rate was 5.7 per cent in March compared to 3.1 per cent in February 2020.