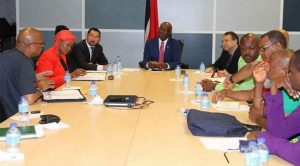 Rowley stated in a media release that the Government is “borrowing to pay salaries” and it is difficult to talk about increases now.

His statement followed Joint Trade Union Movement leader Ancel Roget’s remarks that trade unions were “disappointed” and “dissatisfied” with the meeting and its outcome.

Speaking outside the Office of the Prime Minister in St Clair after the meeting, Roget said the discussions fell short of any sort of agreement.

The meeting came off after weeks of the unions clamouring for a meeting with the prime minister and last week issuing an ultimatum to the Government to set a date for this week.