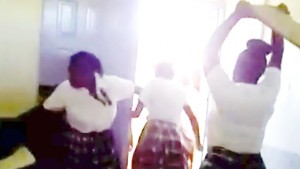 The Ministry of Education has launched a full investigation into the brutal fight amongst students at the Ottos Comprehensive School, amidst public condemnation of the video recording of the encounter which has since gone viral.

In a statement, Thursday, Acting Director of Education, Clare Brown said the ministry is investigating the matter and is not in a position to provide “any further information.”

The video, posted on Troll Antigua’s Facebook page, shows a teenaged girl being beaten viciously by two others, one using a piece of wood, the other her fist.

Brown said the ministry also committed to ensuring that schools’ compounds remain safe at all times. He said the ministry is seeking the support of “parents, guardians and the community to reinforce our efforts.”

During the course of the violent attack, which took place in a classroom, those present looked on and cheered with no attempt to end it.

In the middle of the violence a student in the video queried, “you go kill she?”

Many of those who commented on the video criticised it and called on the relevant authorities to take action.

“I hope they get arrested and expelled,” one post said.
“It’s this Troll Antigua likes to see and promote, violence amongst our youths. I am not even going to laugh. That is just serious. They could have damaged the girl’s spinal cord,” another said.