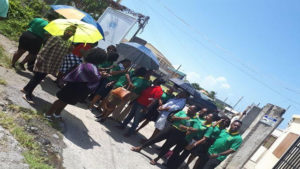 Officials at the Ministry of Education remain mum on Cayon High School teachers refusing to enter the facility due to concerns about mold infestation.

According to multiple sources, on Monday teachers at Cayon High stood outside the school in protest of the mold situation at the school. It is being alleged that a number of teachers have been tested and had high levels of mold in their blood and have become concerned about their health.

One source said teachers were promised that testing of the school would be done in time for the reopening of school, however, though they were informed that testing was done on Friday 23rd August, they are still concerned that the environment is not safe.

Their contention is that they have not been apprised of the results of said tests.

The educators are calling on the Ministry of Education to prioritize the health and safety of the staff and students, saying officials were informed about the presence of mold in the school six months prior.

Freedom FM sought comment from the Ministry on Tuesday and a high ranking official said no public statements are being made at this time, however a press release on the issue is being prepared for dissemination.