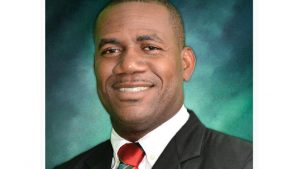 The Cayon High School will not re-open until the Ministry of Education receives final air quality test results and the entire facility is cleaned.

So said Minister of Education, Deputy Prime Minister Shawn Richards during Tuesday’s sitting of the parliament.

The Cayon High school did not open for the new school year on schedule on Monday as teachers determined they would not occupy the facility until test results indicated the environment was safe.

Minister Richards indicated that shipment of those test results from overseas had been delayed due to the passage of Hurricane Dorian and the Ministry expects to have have them within the next day or two. He stressed that the Ministry had moved swiftly to resolve the mold concerns at the Cayon High School.

“On receipt of a written report from the Cayon High School indicating that it was evident that mold was present at the school’s Science Labs, the Ministry of Education responded swiftly and decisively. The Ministry of Education immediately engaged the Bureau of Standards to conduct testing in the Science Labs. The tests carried out by the Bureau of Standards confirmed that mold was present in the Science Labs. The report also confirmed that the levels of mold found were not significantly high. The Science labs were cleaned, cupboards removed and the labs were subsequently retested.

“The Ministry of Education convened numerous meetings with the staff of the Cayon High School to give updates on what steps were taken to address the presence of mold in the Science Labs. The concerns of the teachers were addressed; many of their suggestions were taken into consideration, in determining the way forward. As a result of discussion with teachers, other spaces on the school’s campus were tested. The results of these tests will be made available upon receipt.”

The Deputy Prime Minister also informed that extensive cleaning and other procedures have been carried out and continue at the Cayon High in order to ensure the facility is sanitized and mold free so it can be re-opened soon.

“Notwithstanding the delayed results, during the Summer Vacation the entire Cayon High School was fumigated, and areas identified to have termites were treated. At present a professional cleaning company is contracted to clean the entire school. All spaces are power washed and sprayed with chemicals that will remove any trace of mold infestation.

The Ministry of Education has apologized to all for the inconvenience caused and expresses its profound thanks to the principal, staff, parents and students of the Cayon High School for their patience, understanding and resilience demonstrated during this very trying time in the life of the institution.