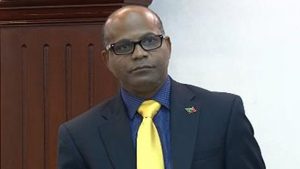 The staff at the Ministry of Tourism who had control of the 75 Music Festival tickets that disappeared about a week before the event will be held accountable and liable.

This is according to Minister of Tourism Lindsay Grant.

“Immediately upon realizing we had an infraction we we came out to public in a press release indicating that we had 75 tickets that we believed, for want of a better word, stolen, and that we would have proceeded right away with an investigation. In fact, when it came to my attention I summoned the team within my office to a meeting and indicated to them what I understood to be the position.

“The tickets were being managed by about 8-10 persons –those are the persons I had the discussion with. I indicated to them that if the tickets weren’t in the office by whatever means before the end of the St. Kitts Music Festival those who had touched or management of the tickets would be accountable for them.”

According to the minister, this means that the members of staff, guilty or innocent, will have to pay the over $10,000 value of the tickets in cash.

“Meaning 75 tickets at $10,125 they will have to account for that individually and collectively, and unfortunately the innocent will have to pay for the guilty, and that’s where we’re at.

“Well the tickets have not shown up and so the monies must show up in the government coffers at the end of the day, and that is it. I can’t see any other way; they will have to pay for them. I’m not pointing my finger at any one particular individual but when you are in a position of trust and confidence that must be displayed, and so they will have to come up with the $10,125, between them, and I’ve made that pellucidly clear.”

The Ministry had issued a statement informing of the missing tickets and warned that police had been alerted, and because they knew the serial number of those tickets, law enforcement would deal with anyone found attempting to enter the stadium for the concerts.

Minister Grant has however not stated the time frame given to the staff involved to pay the monies, or what would happen if the monies are not paid.