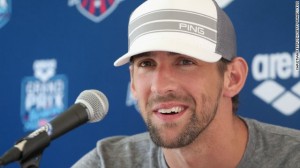 (CNN) — USA Swimming on Monday suspended Michael Phelps, the most decorated Olympian ever, for six months and said he won’t be on next year’s U.S. team at the world championships.

The organization said Phelps, who was charged with DUI last week in Maryland, had violated its code of conduct.

“Michael accepts USA Swimming’s sanctions. He has apologized for his actions and, as he shared yesterday, is taking steps to address them,” a spokesperson from his management company, Octagon, told CNN.

Phelps announced Sunday on Twitter that he is taking a break from the sport “to attend a program that will provide the help I need to better understand myself.”

According to his official Twitter account, “Swimming is a major part of my life, but right now I need to focus my attention on me as an individual.”

The decision comes after he was charged last week with driving under the influence of alcohol, excessive speed and crossing double lines on Interstate 95 in Baltimore.

The four-time Olympian, 29, was arrested last Tuesday about 1:40 a.m. and later released, police said. According to media reports, police said his blood-alcohol content was .14.

The chief executive officer of the United States Olympic Committee said he thought the sanctions were appropriate,

“And we are glad that Michael is seeking help,” Scott Blackmun said in a news release. “We are grateful that nobody was hurt and appreciate the speed at which USA Swimming and Michael took action.”

In 2004, he was arrested on charges of driving under the influence in Salisbury, Maryland. He pleaded guilty and was sentenced to 18 months probation. He also issued an apology after that incident.

Five years later, a photograph of him smoking marijuana at a party surfaced.

“I’ll make a million mistakes in my life, but as long as I never make the same mistake again, then I’ve been able to learn and grow,” Phelps said in 2012. He also said that the incident made him realize who his real friends were.

He retired after winning four gold and two silver medals at the 2012 Olympics.

Phelps returned to competitive swimming in April and raced for the United States in August at the Pan Pacific Swimming Championships, his first international meet since the London Games (and two years before the next Games in Brazil).