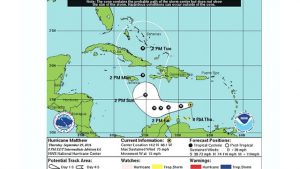 The Meteorological Service last evening suggested that Hurricane Matthew will not spare the island as it moves into the central Caribbean after dumping heavy showers on eastern Caribbean countries and causing at least one death.

Met Service Director Evan Thompson made the projection at an emergency meeting with local officials called by Prime Minister Andrew Holness, who said government services have been placed on high alert.

Yesterday, fishers on Jamaica’s cays and banks were advised to evacuate immediately and return to the mainland.

Other small craft operators in the island’s coastal waters were also told to return to port, while those in port were advised not to venture out.

The hurricane, which at 4:00 pm yesterday was located near latitude 14.1 degrees north, longitude 67.0 degrees west, or 240 kilometres north-east of Curacao, was forecast to continue on its westward path today and tomorrow and then turn towards the north, bringing it closer to Jamaica between Sunday and Monday.

Matthew, which formed Wednesday morning near the Eastern Caribbean and has since been upgraded to a category one hurricane, had maximum sustained winds of nearly 120 km/h, with higher gusts, and was expected to strengthen as it gets closer to Jamaica.

Last evening, Thompson said that Matthew is expected to stay on its projected path.

The meteorologist said that as the system continues to move westward there might be some motion toward the south, which would seem to suggest that it is actually going to be moving away, but that will be short-lived as it is expected to make a dramatic turn towards the north.

“And so it is expected after Saturday to turn toward the north-west initially and then continue to move toward the north and take the centre of this hurricane very close to, if not over, Jamaica,” Thompson said.

“…Model prediction has improved over time, and so there is good reason to believe the reliability of the projections seen at this time,” he said, adding that this would cause the system to spread its band of heavy rainfall over the entire island.

“…Currently there are projections that we would see somewhere in the order of two to four inches of rainfall over western parts of the island. In the east, rainfall amounts are expected to increase. It could get as [high] as eight inches over eastern parishes and it could even exceed that in hilly terrain. So we are expecting significant rainfall from the system as it moves past us,” he said, adding that Matthew is expected to upgrade to category two as it nears the island.

Thompson also pointed out that wind projection is likely to change and should not be taken lightly.

“The system could further intensify,” he said.

In the meantime, Holness said: “The Government is now officially on high alert in preparation for a hurricane. It may not come; it may divert, but our job is to be prepared. So I’ve officially placed the apparatus of the Government on alert.

“The Government will do what it can; it will do its part, but I have to appeal to the individual responsibility of each and every Jamaican to look out for your own safety and security …Heed the warnings that are given from the Government, particularly warnings to evacuate,” he urged.

At the same time, Holness said the Government will make an advance from the Constituency Development Fund available to parliamentarians. The amount, he added, will be communicated today.