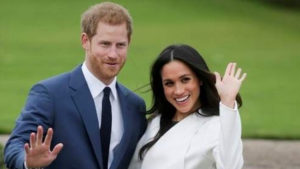 Meghan Markle and Prince Harry have welcomed their second child, a baby girl. The new baby, born in California, is the Queen’s 11th great-grandchild and Prince Charles’ fifth grandchild.

“It is with great joy that Prince Harry and Meghan, The Duke and Duchess of Sussex, welcome their daughter Lilibet ‘Lili’ Diana Mountbatten-Windsor, to the world. Lili was born on Friday, June 4 at 11:40 am in the trusted care of doctors and staff at Santa Barbara Cottage Hospital in Santa Barbara,” a spokesperson for the Sussexes said in a statement to HuffPost.

“She weighed 7 lbs 11 oz. Both mother and child are healthy and well, and settling in at home. Lili is named after her great-grandmother, Her Majesty The Queen, whose family nickname is Lilibet,” the statement continues. “Her middle name, Diana, was chosen to honor her beloved late grandmother, The Princess of Wales.”

“This is the second child for the couple, who also have a two-year-old son named Archie Harrison Mountbatten-Windsor. The Duke and Duchess thank you for your warm wishes and prayers as they enjoy this special time as a family.”

Lilibet was first used when Princess Elizabeth was just a toddler and unable to pronounce her own name properly. Her grandfather King George V would affectionately call her ‘Lilibet’ imitating her own attempts to say Elizabeth.

The Duke of Edinburgh also referred to his wife as Lilibet, writing to his mother in law after their wedding: “Lilibet is the only ‘thing’ in the world which is absolutely real to me.”

Lili’s middle name Diana honours Harry’s later mother Diana, Princess of Wales, who died in a car crash in 1997 when Harry was just 12. Lili has been born almost a month before the princess would have celebrated her 60th birthday on July 1.

Lili’s cousin Princess Charlotte also has Diana as one of her middle names, as well as Elizabeth. She is Charlotte Elizabeth Diana.

The Duke and Duchess of Cambridge’s official Twitter account posted: “We are all delighted by the happy news of the arrival of baby Lili. Congratulations to Harry, Meghan and Archie.”

The Prince of Wales and the Duchess of Cornwall also shared congratulations on Twitter, with a post on their official account reading: “Congratulations to Harry, Meghan and Archie on the arrival of baby Lilibet Diana. Wishing them all well at this special time.”

Anyone wishing to send a present to Meghan and Harry is asked to support organisations working for women and girls.

A message on the Archewell website reads: “For those inquiring on sending gifts, we would ask that you support or learn more about these organisations working for women and girls: Girls Inc., Harvest Home, CAMFED or Myna Mahila Foundation.”

The couple announced on Valentine’s Day that they were expecting their second child in a heartwarming post on social media.

“We can confirm that Archie is going to be a big brother. The Duke and Duchess of Sussex are overjoyed to be expecting their second child,” a spokesperson for the couple told HuffPost in a shared statement at the time.

Harry and Meghan welcomed their first child, Archie Harrison Mountbatten-Windsor, on May 6, 2019.

While it was previously thought that the couple didn’t want to give Archie a title, Meghan told Oprah Winfrey that the royals actually made the decision ― which would mean Archie wouldn’t have royal security, either.

“He needs to be safe,” the duchess told Winfrey. “If you’re saying the title is what’s going to affect their protection — we haven’t created this monster machine around us, in terms of clickbait and tabloid fodder. You’ve [the Firm] allowed that to happen, which means our son needs to be safe.”

The Diana Award, established to continue the legacy of the late Diana, Princess of Wales, added their congratulations.

In a tweet the organisation said: “Congratulations to The Duke and Duchess of Sussex on the birth of their daughter Lilibet Diana Mountbatten-Windsor.

“We extend our warmest wishes to The Duke, The Duchess and little Archie.”

The Prime Minister tweeted: “Many congratulations to The Duke & Duchess of Sussex on the birth of their daughter.”

The Wellchild charity, of which Harry is patron, congratulated the couple.

The organisation tweeted: “Congratulations to The Duke and Duchess of Sussex on the birth of Lilibet Diana Mountbatten-Windsor.

“We wish our Patron The Duke, and The Duchess every happiness as they start this new adventure.”