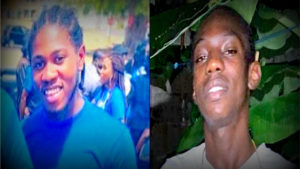 The Mc Knight Community was on Monday night plunged into mourning as two young men from that community were brutally gunned down around 7pm.

Reports that the Royal St Christopher and Nevis police force had cordoned off sections of Lower Fiennes Avenue and Lower Thibou Avenue as well as a portion of the Irishtown Bay Road, as they launched an investigation into a shooting incident quickly spread across the island. Scores of residents were also on the scene trying to ascertain what had actually happened, as shots were heard as far as the Garden’s Playing Field.

The police at 7:41pm confirmed that two individuals were shot. One victim died on the scene and at that time a second was fighting for his life at the JNF General hospital.

Just after 10:00pm police reported that the second man sadly lost the battle for his life.

The victims have been identified as 20-year-old Lamont Heyliger of McKnight who died on the scene, and 19-year-old Jaquan “Mini” Merritt of Fort Thomas Road, who succumbed at the hospital. Both men were friends since they were children.

According to an official police press statement, “Preliminary investigations so far have revealed that Heyliger, Merritt and other persons were in a shed when an individual shot both men.”