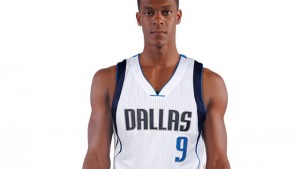 DALLAS — The Dallas Mavericks suspended Rajon Rondo for their game Wednesday night in Atlanta for conduct detrimental to the team, a day after the point guard had a heated exchange on the court with coach Rick Carlisle and was benched.

Carlisle said he must communicate better with Rondo.

“The incident last night was born in large part from poor communication between him and I,” Carlisle said before Dallas’ 104-87 loss. “That’s on both of us. We had a long talk about the situation today and we both agreed we need to communicate more frequently and we need to work on the solution of making his stint as a Dallas Maverick the most successful one possible.”

Rondo came out with 8:10 left in the third quarter of Dallas’ 99-92 home victory over Toronto. He was bringing the ball up the court when Carlisle angrily shouted for a timeout and exchanged words with Rondo from several feet away as the player headed to the bench.

The Mavericks were trailing by nine when Rondo was pulled and rallied with backups Devin Harris and J.J. Barea running the offense along with leading scorer Monta Ellis, who sometimes handles the ball.

Carlisle said Rondo will return as a starter for the Mavericks’ next game against Brooklyn on Saturday.

“It’s one game. He’ll serve it tonight,” Carlisle said. “We’ll be off tomorrow. He’ll practice Friday and he’ll be back in the starting lineup on Saturday. The events of last night are now in the past and we’ve got to move forward.

Carlisle said the suspension was “an organizational decision.”

The suspension left the Mavericks with only 11 players against the Hawks. Center Tyson Chandler was held out with a hip contusion and forward Amare Stoudemire was rested with the team playing on back-to-back days. Forward Chandler Parsons was held out with a left ankle injury.

Acquired in a trade with Boston in December to try to improve the playoff outlook for the Mavericks in the difficult Western Conference, Rondo hasn’t had an easy transition.

The four-time All-Star who won a title with the Celtics in 2008 was on the bench in the final minutes of a four-point loss to Chicago about a month after the trade and said afterward he didn’t have a problem with Carlisle’s decision. Dallas’ offense has sunk from the top of the league to fourth in points per game since he arrived.

“For us to get where we want to get … his abilities have to be utilized by us the best possible way,” Carlisle said. “That’s in large part my responsibility and I do not dodge that. And a lot of that starts with great communication with him. I’m always working on being a better communicator and we talked about it today. He admitted that he’s got to do the same. So that’s where we are and we’ll go forward from here.”

Also brought in to improve the Mavericks’ perimeter defense with a long list of strong guards in the West, Rondo had some success against Houston’s James Harden and Oklahoma City’s Russell Westbrook before breaking a bone near his left eye at Orlando and missing six games.

In his first game back after the All-Star break, Rondo couldn’t slow Westbrook in a blowout loss to the Thunder. He bounced back with a solid outing in a win over Harden and the Rockets.

The Mavericks made the move for Rondo after offseason pickup Jameer Nelson struggled at the point. Dallas gave up Nelson, swingman Jae Crowder, forward Brandan Wright and two draft picks for Rondo and forward Dwight Powell, who has played sparingly.

The win over Toronto gave the Mavericks a sweep of a three-game homestand and pulled them within half a game of Houston for third place in the tightly packed West. There are four teams separated by just a game and a half in the battle for two spots with home-court advantage in the first round.