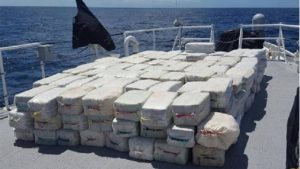 A massive drug bust of cocaine and cannabis took place at the deep-water port in St Kitts on Tuesday.

Acting on a tip received, the boat “Elizabeth C” which arrived in St Kitts on Tuesday was intercepted and searched by Customs, the Drug Squad and the Coast Guard and the pallets of drugs was found.

A Customs Official pointed out to Freedom Newsdesk that the boat was heading to Tortola. Following the search and subsequent discovery, the drugs were loaded in two pickups and the crew were detained for further investigation.

Freedom Fm will have more on this developing story.