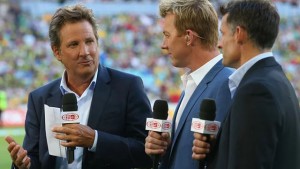 The broadcaster Mark Nicholas, left, wrote that his comments were ‘unworthy of the game and disrespectful to a great cricketing legacy’.

Mark Nicholas has apologised to the West Indies captain Darren Sammy and his team after describing them as “short of brains” in the buildup to the World Twenty20 tournament in India.

On the eve of Sunday’s final in Kolkata, which West Indies won by four wickets in a dramatic last over against England, Sammy had revealed that the broadcaster’s comments “really set it off for us”, adding: “To describe our team, who were defending champions two years ago, as guys with no brains is really out of order.”

In his column for Cricinfo on Monday, Nicholas wrote: “[I] offer an unreserved apology to Darren Sammy, a man I hold in the highest regard, to his team and to the coaches around them for the throwaway phrase I used in a recent column on these pages.

“I would have made the same apology whatever the results of the day,” the former Hampshire captain added, “but I do so now in the knowledge that the people of the Caribbean will have celebrated long into the night and well into today.”

After the final, the player of the match, Marlon Samuels, dedicated his award to his long-time adversary Shane Warne and had some choice words for England’s Ben Stokes, before Sammy once again turned to Nicholas’s remarks.

“I’m done with Mark,” Sammy said. “This tournament, with all that happened before … The disrespect from journalists, from our own cricket board. That was out of order. The only way we could make a statement was by winning this tournament. When you see these 15 men playing out there with hunger and passion, it all stems from what has been boiling inside.”

In his apology Nicholas described the comment as a lazy judgement. “I did not say West Indies were ‘brainless’ or had ‘no brains’, as has been misquoted elsewhere, but I did say something unworthy of the game and disrespectful to a great cricketing legacy.

“My thought was based a) on what I had seen in Australia, first during the World Cup and then during the recent Test matches against the Australians, when the admirable Jason Holder received scant support from influential players around him, and then b) on the fact that many West Indians know their way around the IPL, which must be useful.

“But it was a throwaway, not a considered judgement, and frankly, pretty damn lazy because it did not take account of the different personnel,” he added. “I regret it and apologise for it.”