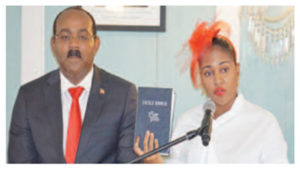 A historic moment in the political history of Antigua and Barbuda was created yesterday when Prime Minister Browne and his wife Maria Bird-Browne, now Member of Parliament for the St John’s Rural East Constituency joined each other at Government House.

Both were sworn in yesterday, along with other members of the new Antigua Barbuda Labour Party (ABLP) government which was elected to serve a second term in the March 21 general election.

The Browne’s will be the first prime minister and wife couple to sit in the Parliament, additionally, she is also the youngest person elected to parliament.

Bird-Browne of the ABLP got 2,175 votes, Young of the UPP got 975, Cornelius who represented the DNA secured 134 votes.

Speaking in an interview with OBSERVER media, shortly after the official count on Thursday morning, the newly elected MP said she was overjoyed and was ready to serve.

She also explained that her party’s victory at the polls shows that the residents are satisfied with the ABLP’s performance.