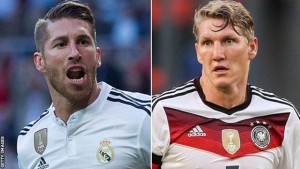 United boss Louis van Gaal is trying to strengthen his squad after they finished fourth in the Premier League.

Germany international Schweinsteiger, 30, and 29-year-old Spain player Ramos are among those who interest him.

Ramos’ contract with Real expires in 2017, while Schweinsteiger’s Bayern deal runs until 2016.
Why do Man Utd want them?

Scorer of Real’s injury-time equaliser in their Champions League final victory over Atletico Madrid in 2014, Ramos has made 445 appearances for the club since joining from Sevilla in 2005.

Schweinsteiger also has a World Cup winners’ medal – starting for Germany in their victory over Argentina last year.

He has been with Bayern all his career and won his eighth league title in May. He also won the Champions League in 2013.
How could the moves happen?

Real’s interest in goalkeeper David De Gea will be used by United in their attempt to sign Ramos.

Van Gaal said at the end of last season it would not be easy to keep De Gea – United’s player of the year for the second successive year.

The 24-year-old Spain international has refused to extend his contract beyond 2016.

The Red Devils have been linked with several potential replacements during what Van Gaal said could be a “rough” summer for some of his players given the changes he anticipated.

“A club like Manchester United has to be like that,” said Van Gaal in May. “When you purchase other players you get a stimulus.”
Who else do Man Utd want?

Barcelona full-back Dani Alves also interested them, but he has signed a new deal at the Nou Camp.