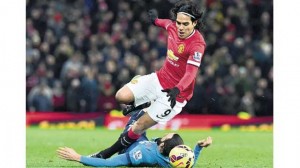 Gerrard, the subject of speculation about his Anfield future this week, stroked home the crucial second goal as Liverpool came from behind to win 3-1 at 10-man Leicester City.

Victory lifted Brendan Rodgers’s side up to eighth place, but they remain five points off the Champions League berths after Mata’s fortuitous strike earned fourth-place United a 2-1 success at home to Stoke City.

The Spaniard saw a free-kick from wide on the right drift straight into the net in the 59th minute at Old Trafford, sending United to within a point of third-place Southampton, who visit Arsenal on Wednesday.

Gerrard, 34, was recalled to Liverpool’s starting XI after starting Saturday’s 1-0 win over Stoke on the bench, but his return did not spare the visitors from a wobbly start at the King Power Stadium.

Esteban Cambiasso should have put Leicester ahead in the 20th minute when under-fire Liverpool goalkeeper Simon Mignolet played the ball straight to him, only for the Argentine midfielder to roll the ball wide.

But Leicester went ahead two minutes later, with Leonardo Ulloa’s shot hitting the post and cannoning into the net off Mignolet’s back for an own goal after Martin Skrtel had blocked on the line from Jamie Vardy.

Gerrard’s moment arrived nine minutes into the second period. Wes Morgan could only get a toe to Raheem Sterling’s low left-wing cross and Gerrard strode forwards to bend the loose ball into the bottom-right corner.

After Morgan was sent off in the 63rd minute for hauling back Lambert, Sterling’s back-heel teed up Jordan Henderson to sweep home a late third for Liverpool after a fumble by home goalkeeper Kasper Schmeichel.

Steven Nzonzi equalised for Stoke six minutes before half-time, lashing home from outside the box after a dart by Bojan Krkic.

West Ham United remain a point behind Louis van Gaal’s side in fifth place after coming from behind to win 2-1 at West Bromwich Albion.

Burnley climbed out of the relegation zone following a 1-1 draw at home to Newcastle United, with Papiss Cisse earning the away team a point after George Boyd had put the hosts ahead with a strike from distance.

Meanwhile, Christian Benteke scored the only goal as Aston Villa moved five points clear of the bottom three with a 1-0 success at Crystal Palace.