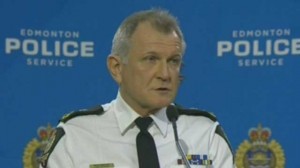 (CNN) — A man described by his family as “depressed and overly emotional” is suspected of killing eight people before taking his own life, police in Edmonton, Alberta, said Tuesday.

Seven of the victims, including two children, were found inside a house in north Edmonton, said Edmonton Police Chief Ron Knecht.

“This series of events are not believed to be random acts and there is no risk to the broader public,” he said. “These events do not appear to be gang related but rather tragic incidents of domestic violence.”

This is the worst mass violence in Edmonton, a city of about 812,000 people in the western Canada province of Alberta, since six people were killed in 1956, Knecht said.

So far, authorities have identified one victim, 37-year-old Cyndi Duong. Knech said all the victims are connected.

Knecht said officers first went to a residence in southwest Edmonton about 7 p.m. Monday after receiving a weapons complaint.

“It is alleged a male entered a private residence, discharged a firearm and fled,” he said.

Inside the house, officers found a dead middle-aged woman.

About 8:30 p.m. Monday, police received a call asking them to check on a man at a house in north Edmonton, Knecht said.

“According to the family, the male seemed depressed and overly emotional,” Knecht said. “The family was concerned the male might be suicidal.”

Police didn’t receive a response when they went to the house and noticed nothing suspicious, the chief said.

Knecht said police were told at 2:20 a.m. Tuesday that a black SUV connected to the first killing had been seen near a restaurant in Fort Saskatchewan, about 20 miles from Edmonton.

Police surrounded the business and determined at 8:45 a.m. that a man inside the restaurant was dead from an apparent self-inflicted gunshot wound, Knecht said.

Police said he is the man whose family had been worried about his welfare the night before.

“We are not looking for other suspects,” Knecht said.

Alberta Premier Jim Prentice said, “We trust that the police agencies’ investigations will help provide answers as we struggle to understand this tragic turn of events. In the meantime, on behalf of the government of Alberta, I extend our deepest condolences to the people affected by this incident, and our appreciation to public servants who provided a professional response during what must have been dangerous and difficult circumstances.”