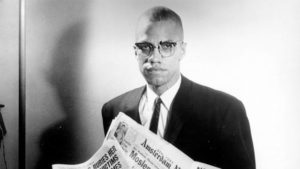 It was 55 years ago, this month, when the fiery civil rights activist and Nation of Islam leader Malcolm X was gunned down in Manhattan’s Audubon Ballroom.

Three Nation of Islam members were convicted of his murder. But now, a new Netflix series has prompted the New York City district attorney’s office to review those convictions and re-investigate who’s actually responsible for killing Malcolm X.

“Who Killed Malcolm X?” looks into the assassination of the man born Malcolm Little and the subsequent convictions of Thomas Hagan, Thomas Johnson and Norman Butler.

According to the producers of the Netflix series, questions linger over the guilt of Johnson and Butler.

“There’s been considerable doubt about the guilt of two of the three men convicted in the assassination of Malcolm X,” said Phil Bertelsen and Rachel Dretzin, co directors and producers of “Who Killed Malcolm X?”

So much so that the Innocence Project, a nonprofit that seeks to exonerate the wrongly convicted, met with Manhattan District Attorney Cy Vance about the case, according to Vance’s spokesman, Danny Frost.

“He has determined that the district attorney’s office will begin a preliminary review of the matter, which will inform the office regarding what further investigative steps may be undertaken,” Frost said in a statement emailed to ABC News.

Frost confirmed that Senior Trial Counsel Peter Casolaro, who was part of the team that re-investigated and dismissed the “Central Park Five” case in 2002, also will assist with the Malcolm X case.

“The primary reason is that the only assassin (Thomas Hagan) caught at the scene and carrying a weapon, said that the other two men — Thomas Johnson and Norman Butler — were innocent at the trial,” they said via email. “Ten years later, when attorney William Kunstler attempted to reopen the case, Thomas Hagan maintained the innocence of Johnson and Butler, and named the men he said were the real accomplices in a sworn affidavit.”

Hagan, who also used the aliases Talmadge Hayer and Mujahid Abdul Halim, served 44 years in prison and was released in April 2010.

Norman Butler, aka Norman 3X Butler, aka Muhammad Abdul Aziz, was released on parole in 1985. He’s now 81 and has spent decades trying to clear his name.

Hagan has insisted that the other two men convicted are innocent.

“I just want to testify that Butler (Aziz) and Johnson (Islam) had nothing to do with it. … I was there, I know what happened and I know the people who were there,” Halim testified in court on Feb. 28, 1966, as reported by The New York Times.

“There’s testimony that provides an alibi for the two wrongfully convicted men,” Bertelsen and Dretzin told ABC News. That testimony, they said, “persuasively argues that Butler and Johnson could not have been at the Audubon … that day.”

They said that since Johnson and Butler were known enemies of Malcolm X they either would not have been allowed into the Audubon or would have been noticed by security.

As to who they think aided Hagan in the assassination? It’s a question they address in the series.

“The sworn affidavit given by the confessed assassin, Thomas Hagan, named his four accomplices — none of whom were ever investigated or questioned,” said Bertelsen and Dretzin. They said their documentary explores the possible involvement of a Newark, New Jersey, man, William Bradley, aka Al-Mustafa Shabazz.

Ilyasah Shabazz, the daughter of Malcolm X, told ABC News in an emailed statement late Thursday that “words cannot express” how she feels about Vance considering reopening the investigation into her father’s death.

“I hope these investigations will bring about clarity and transparency regarding this devastating, criminal act against my family and all the `devoted followers of a beloved Malcolm,” she added. “My father lived his life advocating for and in the pursuance of truth. He deserves the same dedication to truth from all of us.”

Barry Scheck, part of O.J. Simpson’s “Dream Team” defense, is the co-founder of The Innocence Project. He released a statement on the reopening of the Malcolm X case:

“We are grateful that District Attorney Vance quickly agreed to conduct a review of the conviction of Muhammed Aziz. Given the historical importance of this case and the fact that our client is 81 years old, we are especially encouraged that Mr. Vance has assigned two respected prosecutors, Peter Casolaro and Charles King, to work on this re-investigation … We look forward to working cooperatively with them to see that justice is done.”