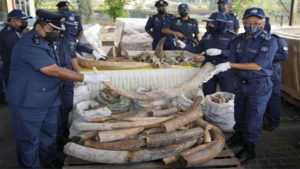 The Customs Department said in a statement it discovered the contraband hidden behind sawn timber following checks on July 10 on a ship coming from Africa. This included 6,000 kilograms (13,227 pounds) of elephant tusks, 100 kilograms (220 pounds) of pangolin scales, 25 kilograms (55 pounds) of rhino horns and 300 kilograms (661 pounds) of animal skulls, bones and horns, it said.

Investigations are ongoing on the importer and shipping agent, the department said without providing further details. It was unclear if the container was meant to be shipped to other parts of Asia. Ivory tusks, rhino horns and pangolin scales are believed to have medicinal properties and are in high demand in the region.