Home / Sports / Make no mistake, Kyrie Irving is entirely to blame for the Nets’ implosion

Make no mistake, Kyrie Irving is entirely to blame for the Nets’ implosion 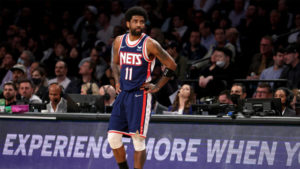 We can talk about James Harden and Kevin Durant requesting trades, but Kyrie Irving is the root cause of the Brooklyn Nets’ situation.

It was Kyrie Irving who decided playing next to a prime LeBron James was no longer desirable and requested a trade out of Cleveland.

It was Kyrie Irving who gave his word to the Celtics and their faithful that he was going to stay in Boston, only to quit on the team in the playoffs before fleeing to Brooklyn.

It was Kyrie Irving who took an unannounced hiatus from the Nets during the 2020-21 season.

It is Kyrie Irving who refused to get vaccinated, leaving his teammates to fend for themselves when he was supposed to be the hand painting an immaculate piece of art.

Irving is an all-world talent. He might even be one of the 10 most talented players in the sport.

And yet, a dark cloud appears everywhere he goes.

When the same outcomes occur over and over again, in uniform after uniform, you don’t point to the city, the franchise, or the uniform.

You point to the person.

James Harden decided he had had enough of the Nets when Kevin Durant injured his knee because Irving was nowhere to be found.

Kevin Durant wants out of Brooklyn partially because of the Nets’ reservation in offering Irving a long-term extension.

Though, can you blame Joe Tsai and Brooklyn’s management? Injuries happen; that, alone, is not a credible reason to not put faith in a 30-year-old guard of Irving’s caliber.

What is credible is that Irving is perhaps the must mercurial player in the entire league. One night, he’s capable of keeping the ball on a string to make defenses dance on his way to 40 points on 23 field goal attempts.

The next, he’s, well, who really knows?

Forget about his opinions about the earth’s dimensions. Everyone is entitled to their own opinions as long as those perspectives don’t harm others.

The problem is that his perspectives breed irresponsibility.

Irving’s intention, in many ways, is noble; but, the Nets find themselves in their current situation because he refused to manifest it on his own time or in less pernicious ways.

So assessing blame to Durant, Harden, or the Nets organization for the Brooklyn implosion excuses the issue.

Because Kyrie Irving is entirely to blame.