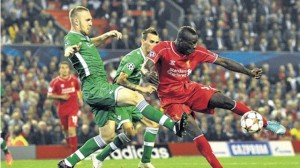 PARIS, France (AFP) — Steven Gerrard was Liverpool’s hero with a stoppage-time penalty as the Reds marked their return to the Champions League with a win yesterday, while Arsenal endured a torrid evening against Borussia Dortmund.

Gerrard struck from the spot right at the death to hand Liverpool a 2-1 win in their Group B opener against an awkward Ludogorets Razgrad at Anfield.

Meanwhile, goals just either side of half-time by Ciro Immobile and Pierre-Emerick Aubameyang gave 2013 runners-up Dortmund a 2-0 win against Arsenal in Germany in Group D, and the hosts were unlucky not to win by more.

The evening’s big winners were the reigning champions Real Madrid, who crushed Swiss title-holders Basel 5-1 in Group B, while last season’s beaten finalists Atletico Madrid suffered a 3-2 defeat against Olympiakos in Greece in Group A.

Liverpool were making their first appearance in the Champions League since 2009 and were widely expected to start with a victory against Bulgarian debutants Ludogorets.

Brendan Rodgers’s side laboured for long spells but when Mario Balotelli put them in front in the 82nd minute to open his Anfield account, they appeared to have the job done.

Spanish substitute Dani Abalo stunned the hosts when he equalised in the first minute of stoppage time, but there was to be another twist as Javi Manquillo was fouled inside the box, allowing Gerrard, so often a scorer of crucial late goals in the past, to convert a 93rd-minute spot-kick.

“To get the result was excellent. They showed great character to keep going,” said Rodgers.

“We had signs of anxiety. We are not at the level we were at last year yet, but that will come with time.”

Arsenal were torn apart by a typically high-octane Dortmund performance at the Westfalenstadion. The hosts had 15 attempts on goal in the opening half but had to wait until the 45th minute to get the breakthrough when Immobile ran 60 yards before slotting past Wojciech Szczesny.

Aubameyang then exchanged passes with Kevin Grosskreutz before rounding the goalkeeper and making it 2-0 in the 48th minute, and the Gabon striker hit the bar soon after as Arsenal lost their opening Champions League game for the first time in 11 years.

“We were not at the requested level tonight,” Arsenal manager Arsene Wenger told Sky Sports. “They deserved their win. We conceded a goal just before half-time and just after, and after that the game was difficult of course.

“Despite an average performance we had plenty of chances. That was the paradox of the night.”

Arsenal will look to bounce back in two weeks when they entertain Galatasaray, who came from behind to draw 1-1 at home to Anderlecht in Istanbul, Burak Yilmaz’s stoppage-time strike rescuing a point after Dennis Praet put the away side ahead.

In Liverpool’s group, Real Madrid bounced back from successive La Liga defeats to outclass Basel in the Spanish capital with Gareth Bale, Cristiano Ronaldo, James Rodriguez and Karim Benzema all on target after Marek Suchy put through his own net.

Derlis Gonzalez got a consolation for the Swiss side, who host Liverpool in a fortnight.

“The reaction of the team today was good,” said Real boss Carlo Ancelotti.

“We pressed very well in the first-half and created a lot of chances. Not everything is resolved just yet, but I liked the reaction of the team.”

Fresh from winning the Madrid derby at the weekend, Atletico came up against an Olympiakos side coached by former Real star Michel and started their bid to reach a second successive final with a defeat.

Arthur Masuaku, Ibrahim Afellay and Kostas Mitroglou all found the net for the Greek champions, with summer signings Mario Mandzukic and Antoine Griezmann replying in vain.

Elsewhere in Group A, Juventus eased to a 2-0 victory over Malmo in Turin thanks to a brace by Carlos Tevez, who ended a five-year wait for a Champions League goal.

In Group C, Benfica were undone by their old nemesis Andre Villas-Boas, the former Porto coach taking his Zenit St Petersburg side to Lisbon and coming away with a 2-0 win.

Former Porto star Hulk and ex-Benfica midfielder Axel Witsel got their goals either side of a red card for home goalkeeper Artur.

The pick of the ties today sees Bayern Munich host Manchester City in Group E. In the other Group E game, AS Roma host CSKA Moscow at the Stadio Olimpico in Italy.