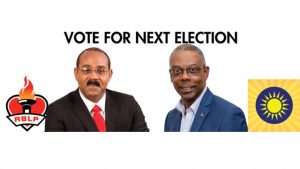 The much anticipated general election date could be revealed in a matter of days. That is according to Information Minister Melford Nicholas who hinted at such during Thursday’s post-Cabinet press briefing.

The announcement, he says, could be made during the incumbent Antigua Barbuda Labour Party’s (ABLP) campaign launch on Monday.

“I think the smart money is on that – even I as one of the Prime Minister’s trusted deputies can’t say with any certainty what the final date will be – but I think it is fair to say that anybody who follows politics would know that at such an auspicious event it is more than likely that the Prime Minister will announce the date that he has indicated to the Governor General.

“For those persons keen on politics, the place to be would be on Nugent Avenue on the 19th where we would expect that announcement to be made,” Nicholas said.

The launch will begin at 7pm at the ABLP’s Nugent Avenue headquarters and will feature guest performances from local acts like Burning Flames, Tian Winter and Claudette Peters and regional artistes like Romain Virgo, Skinny Fabulous and Asa Bantan.

Nicholas expressed confidence that the party will be successful in attaining a third straight term.

“The Prime Minister likes to indicate that it is the best performing administration since [Antigua and Barbuda] became an independent nation and I share that belief as well,” he said.

The confirmation of a date is likely to ramp up the political activities of all three major parties. Opposition parties have been on a state of high alert for over a year after PM Browne hinted in summer 2021 that the election would be held early.